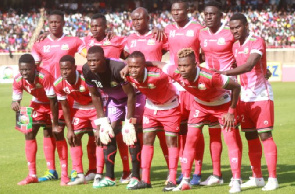 Kenya head coach Sebastien Migné has named a strong starting lineup to face Ghana in the last 2019 AFCON qualifier in Accra on Saturday.

The Frenchman opted for Patrick Matasi who plies his trade with Ethiopian giants St. George to be his number one.Gor Mahia FC’s Philemon Otieno will be at the right back position and left back role is occupied by Sweden based Eric Ouma.

The central defence will have Nkana FC’s Musa Mohammed being paired with Joash Onyango of Gor Mahia FC.

The midfield will see the captain Victor Wanyama making a return from injury.

The Tottenham Hotspur star didn’t play in the reverse fixture in Nairobi.

He will be joined in the middle by ZESCO United versatile midfielder David Odhiambo Owino, Gor Mahia FC maestro Francis Kahata, Belgium based Johanna Omollo and Eric Johanna Omondi who plays for IF Brommapojkarna in Sweden.

UAE’s Dibba Al Fujairah forward Masoud Juma will be the sole attacker for the Harambee Stars.

Ghana and Kenya have already booked their places in the 2019 AFCON but will be fighting for the top spot.