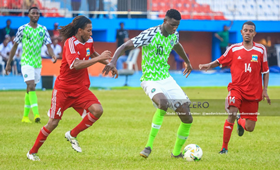 FC Midtjylland striker Paul Onuachu will make his full senior debut in Tuesday’s international friendly between Nigeria and Egypt at the Stephen Keshi Stadium, according to manager Gernot Rohr.
The inclusion of the 2.01 meters tall center forward and Brighton’s Leon Balogun in the starting line-up is expected to be among the changes to be made by the Super Eagles coach.
Onuachu has been handed a starting berth following the injury sustained by the 2019 Africa Cup of Nations qualifiers top scorer, Odion Ighalo against Seychelles on Friday.
”We have a new striker (Onuachu) starting. We will have a new goalkeeper playing and there will be a change in defence, Leon Balogun will play and we will also have a new midfielder in the midfield,” Rohr said at Monday’s pre-match press conference.

”We have the young player Udo  who I saw at the Under 20, we also have Effiong here so we will be able to make six changes since it is a friendly and see a lot of players.”
Onuachu played the last 25 minutes of the Super Eagles final AFCONQ vs Seychelles and Balogun was an unused substitute.