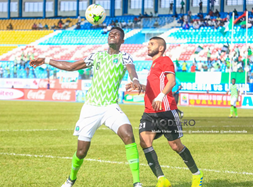 Nigeria U23s coach Imama Amapakabo has admitted the inclusion of Francis Uzoho and Valentine Ozornwafor helped the team to keep a clean-sheet in Monday’s 4-0 rout of Libya in an U23 Africa Cup of Nations qualifier staged in Asaba.

Uzoho, Ozornwafor, Awaziem and Osimhen, who were originally named to the Super Eagles roster, were asked to strengthen the Dream Team after they suffered a  2-0 loss in the first leg of the qualifiers.

”Principally that’s why we had them, I’ve said this over and over again. They’ve always been part of the team,” said Amapakabo at the post-match press conference attended by allnigeriasoccer.com.

”Myself and my head coach, Gernot, we sit down and analyze our players, I think we have a fantastic pool of young players.

”We boast of having one of the youngest sides. We have to look at those young players that are available. Kudos to Nigeria for having these brilliant young talents.”
Responding to a question from Channels Television’s Austin Okon Akpan on what he told the players during the half-time break, Imama said : ”From the onset, ever since we came together I told them two goals is the easiest scoreline to cancel.

”All we needed to do was to score one goal, cancel that and score another goal. We needed one goal at a time.”
Nigeria will qualify for the 2019 Africa U-23 Cup of Nations in Egypt if they overcome their next opponents in the next round scheduled to take place in June.