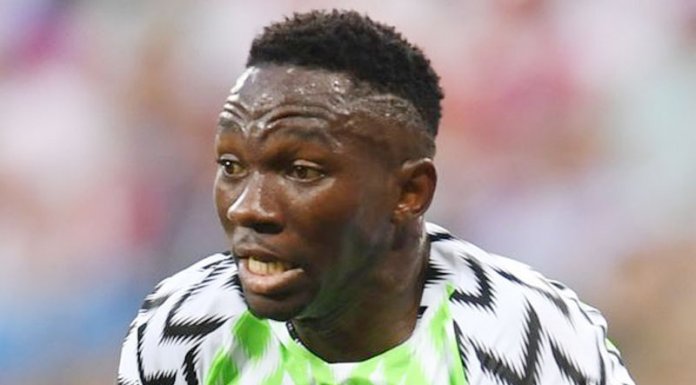 Super Eagles’ defender, Kenneth Omeruo has set his sights on winning a second African Cup of Nations title after helping Nigeria finish top of Group E with their 3-1 win over Seychelles on Friday in Asaba, AOIFootball.com reports.

Omeruo, who remains the only AFCON winner among the 23 invited players for the clashes against Seychelles and Egypt, posited after the Seychelles game that his teammates must now continue working hard to ensure they are fit ahead of the tournament in June.

“Of course, we are dreaming of winning the title. I was part of the victorious team in 2013 and I will love to win it again. However, we are going to take the matches one at a time.

“On our part as players, we have to work hard in our clubs and get regular playing time to ensure we stay fit for the Nations Cup,” Omeruo said.

He further charged the NFF to organize quality friendly matches and proper preparation to ensure the squad is well prepared for the biannual tournament.

“All I can urge the NFF is to organize more friendly matches and training camps for us ahead of the tournament and I am very confident they will do it because they have been doing so lately,” Omeruo concluded.

The 24-year-old earned his 44th senior cap in the win over Seychelles and will be a huge influence if the country is to win its fourth AFCON title having starred in the 2013 edition in South Africa.

Since winning the 2013 edition in South Africa under the tutelage of late Stephen Keshi, Nigeria has failed to qualify for the two consecutive editions held afterwards.

Coach of the Super Eagles, Gernot Rohr however believes the team’s preparation for the AFCON 2019 has started.

“ Everybody I hope by then they would have finished their seasons and it is very important for us that we don’t have any injuries,” Rohr stated.

The Super Eagles will be in action again on Tuesday when they face the 2019 AFCON hosts, Egypt in a high-profile friendly also at the Stephen Keshi Stadium in Asaba.