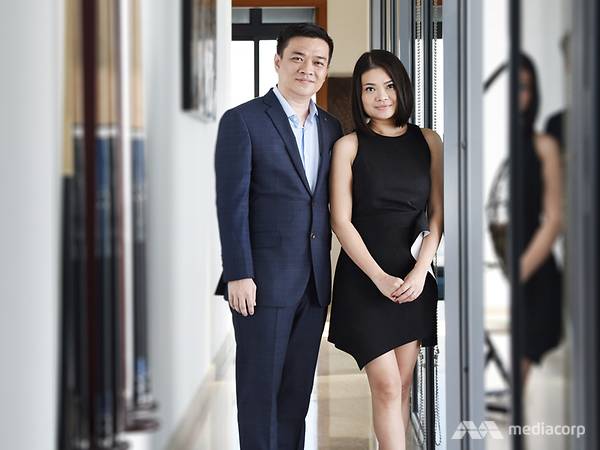 
Singaporean couple, Vincent and Jane Hee, have purchased “the world’s most expensive dinner”.

Vincent and Jane Hee believe the money spent on the “world’s most expensive dinner” – which includes a meal on a private jet and a 2.08-carat blue diamond ring – is going to a good cause.

Charity galas and dinners may be common in the world of philanthropy – but shelling out S$2.7 million on a single dining affair is certainly attention-grabbing. Still, Singaporean couple Vincent and Jane Hee believe the money goes to a worthy cause and, certainly, a decidedly uncommon experience.

The dinner in question is billed as “The World’s Most Expensive Dinner”, an experience curated by the director of Russian diamond company World of Diamonds, Karan Tilani.

Over three days, the Hees have paid for the opportunity to be chauffeured in a Rolls-Royce car to an 18-course dinner by chef Kirk Westaway of Jaan on board a Bombardier Global 6000 private jet, a cruise on a luxury yacht, a night at the Outpost Hotel in a room with 10,000 roses, and another night at the Presidential Suite of Raffles Hotel.

At the dinner, they will be presented with two pairs of diamond encrusted chopsticks, along with a rare 2.08-carat cushion-cut fancy vivid blue diamond ring. The ring is named after former Bond girl and Dr Quinn, Medicine Woman, actress Jane Seymour.

Notably, proceeds from the dinner are going to a cause that may be unfamiliar to many in the region: “Witch-children” – in Nigeria.

Danish NGO DINNødhjælp operates Land of Hope, a children’s centre in Nigeria that houses children accused by their own families of witchcraft. According to the organisation’s website, they aim to “save innocent children, accused of witchcraft, from exclusion, torture and death” and to “lay the foundation for a future, where children grow up to be independent, active and social individuals”. The funds from the dinner will be used to purchase and administer pneumonia vaccines for the children.

Speaking to CNA Luxury at Tilani’s residence prior to the start of their three-day luxury rendezvous, Vincent, a former engineer turned educator and director of Charis Montessori Preschool in Singapore, shared that while he has yet to travel to Nigeria to visit and interact with the children of Land of Hope, video clips depicting their plight, shown to him by Tilani, were enough to move him to part ways with S$2.7 million.

“Initially I did not know about this problem of the witch-children. I’ve never heard about this. But when Karan shared the video clips with me, I was sad to see it,” said Vincent.

The cause was chosen by Tilani, who claimed that “everything is going to save the kids”. “We are looking at purchasing a total of 20,000 vaccines. These vaccines are pneumococcal vaccines to combat pneumonia,” said Tilani.

He sees channeling the proceeds to a Nigerian charity as a means to “do something different”.

“When you think of Nigeria, it is a very negative connotation. You think of scams, you think of cheating. Maybe we have received in our lifetime an email from a Nigerian prince asking for our bank details,” he admitted. “But people want to give back. As human beings, we are compassionate.”

“When you think of Nigeria, it is a very negative connotation. You think of scams, you think of cheating. Maybe we have received in our lifetime an email from a Nigerian prince asking for our bank details.” – Karan Tilani

Vincent has been active in philanthropy since 2012. He has extended financial support to educational institutions, donated to old folks’ homes and, most recently, the couple planted a total of 3,000 trees in Malaysia to combat the haze.

The S$2.7 million he spent on dinner is the most that Vincent has ever contributed to a cause.

“I always ask questions whenever I donate to charity. Will all the money go to the charity? Will the money be of good use?” said Vincent. “This time around, Karan has given me assurance.S

“The World’s Most Expensive Dinner” was first put on sale by World of Diamonds back in 2016. It was purchased a year later by Ville Oehman, a Finnish cryptocurrency fund manager and owner of blue diamond company, V Diamonds.

Through an Initial Coin Offering (ICO), Oehman planned to raffle off the diamond ring. A million tokens were issued, with each token priced at S$2.7 (US$2). The ICO eventually fell through due to “administrative issues”, said Tilani. The dinner was then put back on the market, now with an added layer of philanthropy, and was purchased by the Hees.

Purchasing the dinner was Vincent’s idea, said Jane – “I am just supporting him.” The experience is also a treat for Jane, who has not been given any details about the programme. “I believe ladies love surprises, right?” said Vincent, as his wife smiled beside him.

The couple also described being taken by the beauty of the Jane Seymour ring, a major factor in their decision to purchase the dinner. “The ring is very precious, the colour is so clear. I really like it,” said Jane.

According to Tilani, the ring is certified by the Gemological Institute of America (GIA). While the couple have yet to view the GIA certification as of this interview, Tilani shared that it will be presented to them after the dinner.R

“We are more focused on its beauty,” added Vincent.

The couple have decided to store the ring in Le Freeport, a maximum security private vault in Singapore described as “Asia’s Fort Knox”.

“It’s like if you want to see a famous painting, you go to a museum. So if people want to see the ring, they can come to the vault,” said Vincent. Invitations, however, will be restricted to family and friends.

The Hees said they are looking forward to their dinner. “Karan told me it’s full of surprises,” said Vincent, “so we will definitely love it.”